Raffles closed on the 16th of July 2014. We would like to send our sincere thanks to all the people who supported us over the last 24 years.

While the restaurant no longer exists, this website will remain.

We're a small (30 seats) restaurant in Nagoya specialising in South-East Asian food from Singapore, Thailand, Indonesia, Malaysia, Vietnam and also India. We keep very close to the original recipes so the taste is quite authentic, and, often, quite spicy! (We grow our own chillies.)

There's a lush sub-tropical garden and the interior is spacious so you can relax and imagine you're in Bali or Phuket. If you're feeling nostalgic for your last Asian holiday, or just want to try something different, we look forward to seeing you at Raffles'!

(Taeko's message is in Japanese.
You can read it on the Japanese front page.)

As of July 16th 2014 Raffles is closed. Many thanks to all the people who supported us over the years!

This is one of the most famous Thai dishes- a hot sour prawn soup.

In Japan Tom Yam Kung is often referred to as one of the "three great soups" of the world, the others being Bouillabaisse and Sharks Fin Soup, or possibly Borscht...
["Tom Yam Kung" continues here] 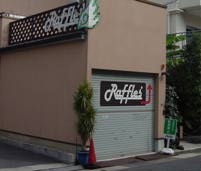 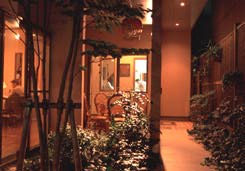 Photos of Some of Our Dishes

Actually Raffles' John plays in a band in Nagoya in his free time, an interesting bunch of middle-aged desperados called Daihachi Ryodan.
If you're curious to know more, have a look at the Daihachi Ryodan website. 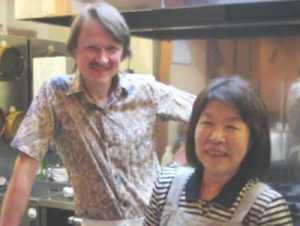